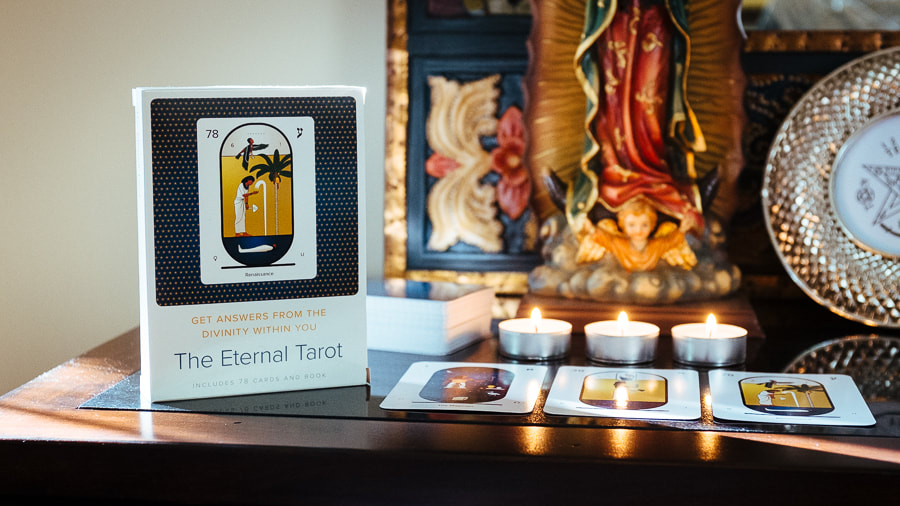 The Eternal Tarot of Alchemy and Kabbalah

The eternal tarot or sacred arcana (pl. "laws," singular "arcanum") constitute the very principles upon which every cosmos is based. Nature is constituted by these immutable, universal, divine, and eternal laws, which are beautifully depicted through the teachings of Kabbalah: the Tree of Life, and Alchemy: the Tree of Knowledge of Good and Evil within the Book of Genesis.

Since remote antiquity, popularized tarot decks bearing a resemblance to these principles have spread throughout Arabia, Europe, and the West.  Due to their exposure to human greed, avarice, and desire, these laws were violated through the public fortune-telling acts of carnivals and divination tables. Likewise, these laws have since been adulterated through the inaccuracy of modern decks, whose series of illustrations depict characters, situations, and archaic symbols misappropriated and misunderstood by the uninitiated.

Sadly, most decks available today have lost the essential principles of the tarot as taught by the Angel Metatron, a great being who delivered to the Israelites the twenty-two Hebrew letters of the kabbalistic alphabet, as well as the twenty-two major arcana and fifty-six minor arcana of the sacred tarot, whose original wisdom was inscribed in stone and is exclusively comprehensible through alchemical knowledge.

This course explains the significance of the twenty-two major arcana in relation to how such principles are conveyed and taught within the internal worlds, the superior dimensions of nature, by the great enlightened, divine masters, angels, buddhas, or gods.  The real tarot, while represented in Egyptian images, are not physically limited to Egyptian culture and symbols; neither can the sacred arcana be confined to a material deck, although the latter may reflect, more or less accurately, the kabbalistic and alchemical principles it represents. Instead, the tarot are living archetypes, living art within the higher dimensions, whose truths we can access in a profound state of meditation and through the esoteric science known as dream yoga.

Therefore, the knowledge contained in this course, as founded upon the writings of Samael Aun Weor (especially his books Tarot and Kabbalah, Alchemy and Kabbalah in the Tarot, and The Manual of Practical Magic) contradicts and goes against much of the current, present day fashions that surround the study of the tarot, many of which ignore its relationship to the Tree of Life and the alchemical science: the transmutation of base metals (egotistical psychological qualities) into gold (spiritual development, knowledge, and cognizance of divinity).  Since a plethora of conflicting and self-contradictory teachings on the tarot exist, we must ask ourselves, when approaching this knowledge:

"Am I learning to communicate directly with divinity as a result of what I have studied?  Am I overcoming my daily problems and sufferings through the knowledge I have weaned from contemporary "tarot" decks?  Am I becoming more compassionate, less resentful, more patient through applying the principles I've learned to my own life?"

The reason why the tarot exist is to provide guidance to difficult situations, problems, and sufferings. It is a means of communicating directly with divinity; therefore, it should not be used for trivialities or circus acts.  Asking for quick fixes to financial burdens or material wants will produce zero genuine results, since the purpose of the eternal tarot is to comprehend the laws of how to redeem the soul, the consciousness. By comprehending the laws of the universe, we can in turn live by them, so as to procure our legitimate, divine birthright: a profound state of liberation and happiness.

Related Books: Alchemy and Kabbalah in the Tarot, Aztec Christic Magic, The Eternal Tarot, Manual of Practical Magic, The Secret Doctrine of Anahuac, Secret Teachings of Moses, Tarot and Kabbalah, The Three Mountains